The famous Central Otago Dunstan Gold rush of 1862 lured Richard Chard from Dorset, England out to New Zealand.  He arrived at the tender age of 14 and worked in the Dunstan and Gibbston areas for several years before settling at

the Morven Ferry end of the old coach road to Queenstown, a place that is now well known in the area as "Chard Farm".  Chard started with a one-acre strip, enough to accommodate a vegetable plot and an orchard.  Richard milked a couple of cows, kept a few hens and became more interested in supplying the miners with food rather than the allurement of gold.  Slowly the farm grew to its current size of 50 acres as small plots were taken over.  The beautifully aspected farm and the qualities of the relatively frost free slopes and free draining soils were recognised early in the development of the Gibbston Valley and Wakatipu areas.  Richard Chard married Emily Green from Woodstock, England in 1884 and they had seven children, all of whom attended the local Gibbston School. 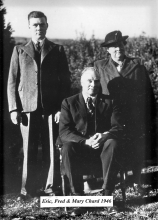 Richard died in 1905, leaving youngest son, Fred, to look after the farm.  Fred kept a bit of the market garden but concentrated on dairying and the first petrol driven milking machines were installed in 1929.  Apart from that little bit of technology, Chard Farm basically "stood still" for the next 50 years as Fred steadfastly refused to keep up with modern technology - "horse" power was the only power on Chard Farm.  There are many stories about machinery salesmen, who after extolling the virtues of their latest tractor-drawn implements for quite some time, were then asked where the horse connected up!  Also Fred's wife Mary, who on a rare excursion to Dunedin in 1950, compared her old black coal range to a new electric range and was told by the eager salesman that to clinch the deal, he would wire it up free of charge, only to be politely informed by Mary that the nearest power was in Queenstown, 25kms away!  The Chard's finally got electricity in 1959.  The farm's income was never more than $1000 a year - but as Eric Chard said, "we never made big money, but we were always happy and comfortable." Fred and his son Eric moved to Arrowtown in 1978 - the end of an era.

Chard Farm then spent a brief period as a stonefruit orchard in the early eighties, during which a 4 million litre dam was built in the hills behind the farm to provide water storage for irrigation and frost fighting.

Rob Hay arrived back in New Zealand in 1985 after studying winemaking in Germany for three years.  He spent the year searching for a piece of land in New Zealand that best emulated the conditions - the "Terroir"- found in some of the greatest vineyard areas of the world - most notably the inland cool climates of Central Europe - Burgundy, Alsace, Champagne and South Germany.  Chard Farm was purchased in 1987 - it was the beginning of the Chard Farm Vinyard.