Chard Farm as a vineyard is a waste of bloody good merino country
- overheard at the local Royal Oak Hotel, Arrowtown, Oct 1987

In August 1986 I set eyes on Chard Farm for the first time. In those days we were part of a small band of pioneers - I was a university graduate and failed (badly) computer scientist. I had just arrived back in NZ from studying winemaking in Germany. A chance encounter with a cousin who worked on an orchard called Chard Farm, near Queenstown piqued some interest in Central Otago. With wife Gerdi (a nurse from Germany) we went down to Central Otago to check out the strange viticultural endeavours of the fledgling Central Otago wine pioneers. We liked what we saw, fell in love with the farm and Kayfa the cat, and started to manage the farm as an orchard. Soon after arrival and out rabbit shooting one gorgeous, balmy, central otago evening, I had an epiphany - I could see the farm as a fully planted vineyard (Gerdi hates this story and thinks its way too dramatic!). My father was quickly summoned ( with chequebook! ) to have a look. Brother Greg came on board as well. 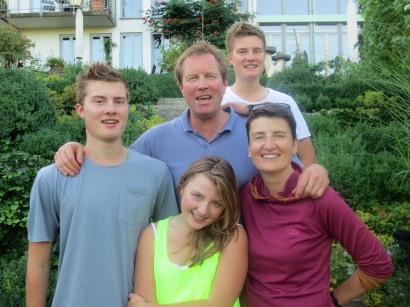 In those days the advice was simple do not plant anything down there at all, or if you are foolish enough, then plant some obscure early ripening Germanic variety such as a Scheurebe or Gewurztraminer.

However we persevered and with a lot of help from family, friends and locals in those early years we got there.

Friends were used and abused - weeding, rock collecting, nursery establishment, marking out the vineyard, irrigation - everything really. We even employed woofers - (willing workers on organic farms) who were given food and board in exchange for work. I think they enjoyed working on the farm as they saw us as a tragic oddity interesting to watch but doomed to fail. We had a lot of Gerdis nurses staying for long periods and helping for no pay. The farm became known as a "Erholungszentrum fuer ausgebrannte Deutsche Krankenschwestern" (a recovery centre for burnt out German nurses!).

Family were also used and abused  at the financial and labour level. My parents chequebook was given a thrashing, my fathers tractor and 4 wheeler motorbike from another farm were borrowed and never returned. Family, especially matriarch  mother Jean, helped establish the nursery, plant out the vineyard and feed us.

Locals took pity on us! - from them we borrowed ploughs, harrows, tractors, girlfriends and post drivers, even stole a leveler once, but gave it back after we were finished.

We were a great team and keen as hell to make a go of it but we didnt really know what it was. It was in hindsight a big gamble, but sure as hell felt right.

At the same time, there was a great camaraderie developing amongst the other pioneers in Alexandra and Wanaka. We shared our trials and tribulations - we were all on a rapid learning curve. It was a fun industry to be in and we were along for the ride - hopefully it wasnt going to end in tears!

Over time we expanded our vineyard plantings into the Cromwell basin where we now have four vineyards and built a winery on the home block in the early 90s. However even then we were still seen as an oddity without much hope. A classic quote at the time by a New Zealand winewriter who may wish to remain anonymous, summed us up -  If Central Otago wine producers think they can produce premium quality wine, they are seriously deluding themselves

It wasnt until the mid 90s that we were taken seriously - the rest is history.