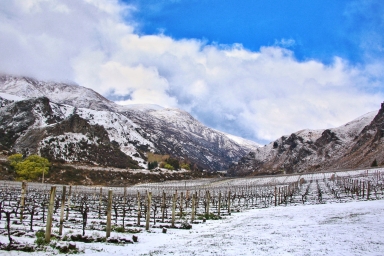 Chard Farm is now a thriving vineyard, it was formerly a market garden set up by the Chard family in the early 1860's to feed the local gold miners as they passed by on their way to Arrowtown and Queenstown. After the new bridge was built across the Kawarau in 1880, the farm was gradually converted to dairying and cropping. The farm was sold out of the Chard family in 1979. A lot of earthworks took place to interlink the alluvial fans and an attempt was made to establish a stonefruit orchard. A 4,000,000 gallon dam was also built to provide frost fighting water and irrigation water for the developing orchard.

In 1987 the current owners, Rob Hay and Gerdi Schumann purchased the farm and carried out further major earthworks before planting out the whole site as a vineyard. The west block was the last block to be planted in vines in 2004.

A winery was built on the site in 1993 and upgraded with a dedicated pinot cuverie and barrel cellar in 2003.