Sales Rep, Queenstown -
Penny Stevens
Penny has recently joined us in the new role of local sales rep, Queenstown area. She's proving to be a great addition to the team and when not out there flying the Chard Farm flag, you will see her pounding the streets on her race bike.

Vineyard Manager - Dylan Turnbull
Great to have Dylan from Alexandra joining the Chard Farm team.  Dylan has over 10 years experience on Central Otago vineyards and brings a real passion for high quality viticulture. Dylan is married to Stevie and they have three children. He is very involved in sports and is coach of a local junior rugby team. 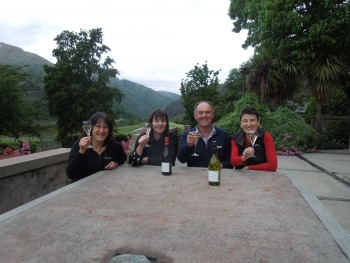 Last year my father – Des, affectionately known as the “the Boss” and the Patriarch of Chard Farm, died aged 88. It was only when he became really ill that the family turned to local health support services for help.

We called on the local Hospice and were very grateful for their efforts and fantastic service.  I became aware of just how important this service is to the community.  However, I was also surprised at the lack of Government funding for all hospices in New Zealand and their need for community support.

We decided that Hospice support would be a very worthy recipient of our charity work and we explored options regarding that. We decided to waive our Cellar door tasting fee for those customers who didn’t purchase and instead asked them for a donation to the local Hospice.

We were hoping to leverage off the altruistic nature of people visiting our Cellar door and it’s worked incredibly well.  We are delighted to report that Chard Farm has now raised over $15,000 for the local Hospice.  This was presented to Celine Collins and the local Hospice Manager, John Mc Dowell, at the Winery just the other day.

In 2015, palliative care nurse specialist Celine began working out of Queenstown to provide care for the Wakatipu Basin area. Thank you Celine, we are very grateful for your compassionate service and work for the community and you are a very worthy recipient of our charity funding.