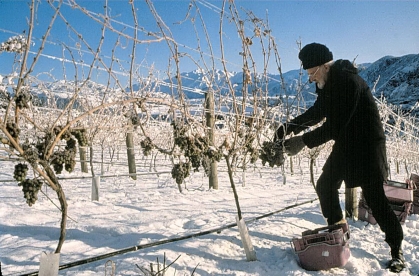 FUN FACT:
Did you know it’s been over 29 years since we produced our first true ice wine…The Southern Hemisphere’s first ever genuine ice wine.

photo: Keith “Tiger” Thompson, Chard Farm legend, harvesting frozen Riesling grapes, June 1992!
As it turned out, we were assisted by the climatic effects of the massive Mount Pinatubo volcanic eruption of June 1991 in the Phillipines. Millions of tons of sulfur dioxide were injected into the stratosphere, and the dispersal of this gas cloud around the world caused shading and global temperatures to drop for 3 years - 1992 - 1994.
Even sections of the Shotover River near skippers Canyon froze from bank to bank in July 1991 and again in June 1992.